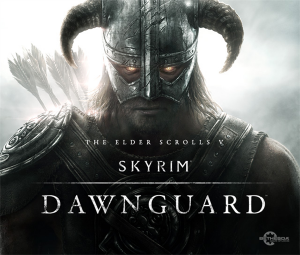 Skyrim has been a huge success for Bethesda Softworks. The average person’s playtime for Skyrim has been about 90 hours since its release in November. The nonlinear gameplay provides endless hours of entertainment. This is not a game that you “finish”, this is a game that you eventually grow bored of, but trust me, it will take a while. I love the freedom provided in this game. It is the closest a non-MMO has come to recreating the joy I get from playing tabletop RPGs. It’s about as sandboxy as a video game can get.

The new Skyrim downloadable content (DLC) will be released this summer. It’s called Dawnguard and is a huge mystery. Rumors about new content like Snow Elves and crossbows abound, but we really have no idea what will be included in the new content. The only thing that has been released officially is the teaser image, which shows a glowy-eyed man wearing the trademark Skyrim helmet. (It cracks me up that this is STILL the helm that they use for all the merchandising since it’s such low-level gear in the game.) The DLC will be released to Xbox 360 players before everyone else, which has really upset a lot of PC and PS3 gamers.

What improvements and content am I hoping for in Dawnguard?

1) I’d love to have them add Snow Elves. I’m a fan of Elves in general, and the lore surrounding the fall of the Snow Elves and their corruption into the feral Falmer race is fascinating. It reminds me of the corruption of the elves into the foul orcs in Tolkien lore.

2) Quests need to be class specific. Yes, some quests are easier to complete for certain classes, but my warrior should never have been able to complete a quest line and become Archmage of Winterhold, and my mage should never have been able to join the Companions. I love sandbox games, but there needs to be some logical limit on a character’s capabilities. This would also encourage me to play different classes. I don’t expect them to go back and patch all the old quests, but it would be great if new quests were logically connected with profession and class.

3) I want to be able to drop fucking quest items from my inventory. Seriously. I’m now stuck carrying around five Stones of Barenziah. It’s lame, because I have 4 houses where I can store stuff. Let me put it in my dresser drawer until I’m ready to finish that quest, or sell it if I’m desperate for money!

4) Horses. Make them not a pain in the ass. If an equine-obsessed girl like me don’t want to own a horse in a game, there is a serious problem.

There have been some new developments for Skyrim recently. Last week, a new patch was available for the Xbox/Kinect setup that allowed players to use voice commands in Skyrim. I haven’t gotten nearly enough use out of my Kinect, so I was very curious to see if this option actually functioned well in gameplay. A handy PDF is available for those with bad memories (me) and the Kinect works surprisingly well with voice commands in game. The quick commands for the map, game controls, and menus, all work very well and I have started using them in place of the controller. However, the dragon shouts were the big ticket item with this patch.

Instead of having one dragon shout option at a time, a player can now use their voice to use any shout in their arsenal. It’s the perfect use for the Kinect, right?…. Sort of. The idea is sound and the technology works much better than I expected, but I am only able to cast the correct shout about 70% of the time when I’m using the three syllable dragon shouts. You really have to enunciate, and space out each part of the shout. You will cast a less powerful version of the shout or fail completely if you rush your syllables together. Take the time to study up on the correct pronunciations of the shouts before you get into trouble. My shouts have improved with practice, but there are a few shouts that I cannot vocally cast for some unknown reason. Maybe my California accent doesn’t translate well to dragon.

Of course, you can always just yell the common tongue name of the spell, but where is the fun in that? FUS RO DAH!!!!!

Farewell to Fear… or Fun?
Thou Shalt Not Play with Assholes
Comment