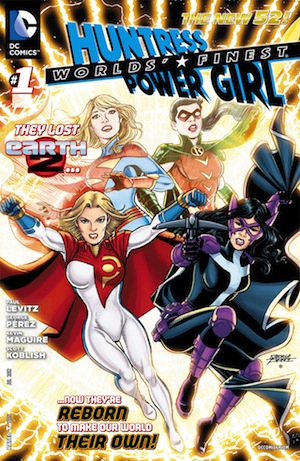 Before I begin, I am going to make the recommendation that you read these two comics in a specific order, read Earth-2 #1 and then read Worlds’ Finest #1. It will make much more sense. Also, THIS POST CONTAINS SPOILERS!!! 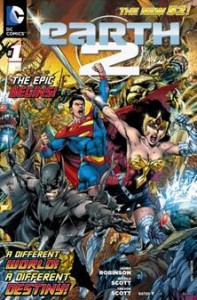 Earth 2
I have to admit that I was torn about them introducing the multiverse back into DC. Although it gives some great opportunities for characters and story lines, it is sort of a cheap comic book trick. Lose your favorite character? He’s still alive on Earth-50! Want Wonder Woman and Superman to hook up? No problem, it happens on Earth-69! Instead of consolidating characters and giving stories more impact, the multiverse tends to water everything down. However, it has paved the way for the return of Power Girl, who is one of my favorite characters! But more on that later…

This entire comic was basically a prologue for stories that are yet to come. I watched the DC Trinity battling to the death against an invading force of aliens. Readers catch up on years of Earth-2 history in a few pages, and boy is it a dark history. The world is doomed, but for real this time. The inner dialogue of our heroes is about as shocking as it comes. Our heroes have lost everything, but are still fighting for their world. They make the ultimate sacrifice. The world survives, but it has no heroes left.

I think this is the best thing they could have done with Earth-2. Wipe out the familiar characters and start from scratch with all new characters. I don’t want to keep track of multiple Wonder Women, or read about an earth that is pretty much just like the main earth (FYI, DC has yet to define which earth the New 52 is taking place on.). Other earths need to be different! VERY different! I hope they hold course with Earth-2 and use it to create some great new characters for the DC universe. That said, the writing was a bit rushed. They tried to fit too much into one book, and that caused the drama to lose some of it’s impact. Generally, I’d want a major character’s death to take up more than a few panels, but I’m hoping that this will be remedied in future books since they won’t be trying to set up an entire new timeline in every issue. I can’t say if I am going to stick with this book, because we have yet to really meet the main characters. I’ll definitely be picking up #2!

The art was good and I liked the costumes on Earth-2. Wonder Woman’s threads had some really great details on them. Crap… now I have ANOTHER Wonder Woman cosplay on my to-do list! 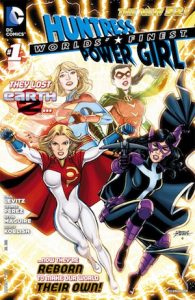 I am a huge Power Girl fan. I even loved her all through the 90’s and her crazy thong, tights, and headband era. But holy crap is her new costume horrible… opps. I’m jumping ahead. Let’s go back a little bit.

This story actually takes place on the main DC earth. It is revealed that Huntress is actually Helena Wayne, the Robin from Earth-2. She and Earth-2’s Supergirl were accidentally transported to the main earth during the epic battle that took place in Earth-2, #1. (Hence the plural possessive punctuation in the title, they are from multiple worlds!) They are utterly alone, but making the best of it. Helena has taken up as the Huntress, and Kara (now called Karen) is a development mogul who seems fixated on returning to Earth-2. She isn’t working as a hero at the moment, but is pouring millions into developing technologies to get the pair home. (Seriously, read Earth-2 #1 before you read this comic.) Neither character seems interested in making contact with the heroes from this world.

Let’s start with Huntress. Although I am very sad that Helena Bartinelli seems to not exist in the DC New 52, I am a huge fan of Helena Wayne as the Huntress. I have a huge collection of old comics from the pre-Crisis era and love that Batman had a bad ass daughter. There is part of me that squealed a little at the thought of her being the main Huntress in the DC Universe again. That said, the writing didn’t nail the character that I know and love. There is also the personality continuity problem between the character in this title, and the character in the Huntress book. Are they the same character? It would seem so, but there is a definite disconnect happening somewhere. I do like the outfit they have given her since the New 52 debut.

And Power Girl. They are definitely TRYING to nail the sarcastic, brash, human character that we love, but again, they don’t quite get it right. Kara was likeable because, despite her amazing powers, she was fallible. She lost her temper, was a little to sexy, and was trying to find herself. 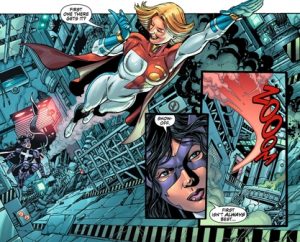 I hope they start to include that in this character as the books go on. Then… there is her new outfit. They have exchanged the boob window for a boob target. Seriously. There is a decorative “P” shape (for Power Girl once she reveals that as her new hero call sign) that fits perfectly over her left breast. There is even a little circle that fits EXACTLY over where her nipple would be. It’s just… odd. It calls attention to her breast (yes… just the left one) in a way that is unsexy, and a little awkward. Almost like when someone has a stain on their shirt and you are contemplating telling them or not.

To be honest, I hated the artwork in this book. Some of it looks like a high school art student drew it. Some panels are beautiful, but sometimes the angles and human proportions are so wrong you wonder how it got printed. It reminds me of the recent Hawk & Dove in the New 52. George Perez’s Wonder Woman run was incredible, so I’m not sure what’s happened with this book. Maybe they just need more practice with these characters? Again, I’m not sold on this series. I might pick up #2, but more likely I’ll just wait until Power Girl pops up in another series.

Framing The Hobbit
Going Digital: The Future of Comics
Comment