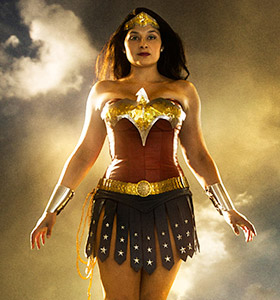 Kimi (aka GoldenLassoGirl) is known for her highly detailed costumes that are influenced by historical fashion. She loves to help others improve their costuming skills with video tutorials and articles on her blog.  Her cosplay work has been featured on DCcomics.com, kotaku.com, TheMarySue.com, io9.com, fashionablygeek.com, and more. As a comic and video game expert, Kimi has contributed to multiple fan-film projects, including the Rainfall Wonder Woman trailer (2013) and Metroid: the Sky Calls (2015), and in 2015 her original Bombshell Big Barda design was used by DC Comics as the cannon design for the character.

This geeky lady is also an avid gamer, and spends a lot of time playing and discussing tabletop and computer games. She is a regular host and producer for the popular Happy Jack’s RPG Podcast, which discusses tabletop RPGs weekly and has thousands of listeners from around the world. She GMs multiple tabletop RPG systems and plays in multiple campaigns that are being streamed live on Twitch/Youtube and released as audio podcasts.

You can find Kimi at: