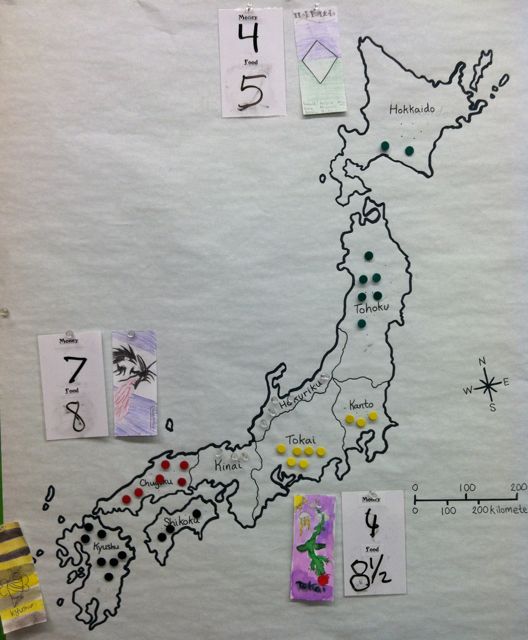 It is a constant challenge to keep students engaged in middle school. You know the age, spring has sprung and suddenly girls no longer have cooties. In fact, they are darn attractive. Suddenly, school is the last thing on your mind when you are sitting in class. It’s Mother Nature herself that I am fighting against each day when I try to keep my 7th graders interested. What weapon can a teacher use in this battle against hormones?

Dice of course! Don’t tell me you are surprised…

I’ve designed a class RPG/Risk inspired simulation to bring Medieval Japan to life in my classroom. Each group of students is responsible for maintaining their feudal state, including the earning of food and money to upkeep their armies. They can declare war and battle against other feudal states, and face the twists and turns that fate can bring upon any civilization. Once my students figured out they could conquer and become the feudal Lords of Japan, their hormones didn’t stand a chance. Score one for gaming!

It started with a map. I did research and created battle maps that showed the actual feudal boundaries in Medieval Japan. I then broke my class into 4 small groups and each group was given a feudal state. They created a “nobori” (Japanese for banner) and a symbol to represent their state. I was really impressed by their banners, and they are showing so much team spirit and loyalty to their own states.

Each state started with 3 armies, 2 food, and 1 money, which are marked on the battle map with notes and push-pins for the armies. Each day, they can earn more armies, food, and money by completing their assignments. They need to maintain a minimum level of money for their armies to continue fighting. They also must have 1 food for every 2 armies each day, or their armies start starving to death. The students can trade amongst themselves for food, money, or armies. They can also attack other feudal states, and if they win a war they get to take over the armies, food, and money of the other state. They also take all the students from the conquered group and become one larger group, so nobody gets left out if their group loses a war.

Wars are where the dice come in. For every push-pin army a group has, they get to roll 1d6. I thought this was a fair way to resolve battles. A group with 5 armies is still capable of defending themselves against a group with 7 armies, but the odds are not in their favor. They can have one battle a day, and a group must win 3 battles in order to win a war. If a group runs out of money during a war, their armies go on strike and they are left defenseless. If they run out of food, their armies will die and be pulled off the battle map. Groups that lose a war are absorbed into the victorious group and get to continue participating in this new larger group. Eventually, one feudal state may conquer all of Japan… but maybe not!

But as always, fate plays a hand in the success or failure of nations. This is represented by the Wheel of Fate in my classroom. The groups spin the wheel each day, and luck decides if something beneficial or detrimental happens. Examples:

– Extra rain falls in your feudal state. +2 food
– Bandits attack local farming villages. – 2 food
– Your Lords give you gifts for a holiday. +1 money
– You give an inspirational speech to your troops. +2 armies
– Your armies need new armor. -1 money for each army

This seems to be the biggest piece of excitement each day. The students all hold their breaths when their state spins the wheel. It is a game changing event each day. As with real life (and RPGs), a well placed famine or flood can cause real damage to an otherwise successful civilization.