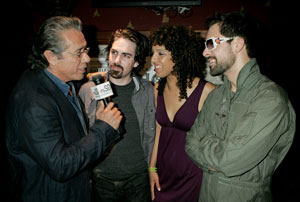 Bear McCreary is a very talented composer who is best known for his work on the rebooted Battlestar Galactica and The Walking Dead. He is also plays the accordion, which is the coolest instrument in existence. Needless to say, I was thrilled when I was invited to an intimate performance of Bear’s at a local restaurant. Both the fangirl and the musician in me were giddy. I was very excited when he came out an announce the title of the show, North of Sunset, West of Vine, and then sat down at the piano. At that point I still assumed that Bear would be the main event of the show, but I was very wrong.

Raya Yarbrough, also known for her musical contributions to BSG, was the star of this performance. I came expecting the usual jazz club formula, but this show was something completely unique. An autobiographical story told through a combination of clever monologues and incredible music. Raya performed both acts (yes, BOTH… there were two of them) by seamlessly transitioning from spoken storytelling to singing, and then back again. The spoken parts are impeccably performed, with an instrumental soundtrack that accompanies every event and emotion that Raya portrays.

Raya’s frank honesty about her experiences growing up in urban Los Angeles can be shocking. She does not sugarcoat the difficulties she faced as a young woman or the inappropriate situations she was placed in as a child. Her performance is so compelling that it is impossible not to be completely captivated by every moment. Her experiences are varied, but they speak to the human element in us. Whether it be her aspirations for success in Hollywood, her struggles with the instability of divorce as a child, or the descriptions of the colorful characters who kaleidoscope through her life, everyone will relate to something in Raya’s story.

I was caught completely off guard by how invested I became in Raya’s story. I had expected some great songs with the traditional segues and banter with the audience in between. Instead, I found myself so involved in the story that I sometimes forgot to clap at the end of songs (despite how amazing they were) because I was anticipating what she was going to say next. I was even moved to tears during one especially poignant song about a shabby, yet joyful Christmas in a single dad’s apartment.

Raya was spellbinding. Even the presence of a famous Sci-fi composer playing an accordion (again, the coolest instrument in existence) hardly pulled my gaze from her. That’s about the best praise I could possibly give a person. No really, she was fucking amazing. Plus, she cites Jem and the Holograms as a musical influence. You can’t beat that.

Look for upcoming performance dates and learn more about Raya at rayayarbrough.com or on Twitter @RayaYarbough.

DC’s New 52 & the JLI
Why did I start Cosplaying?
Comment