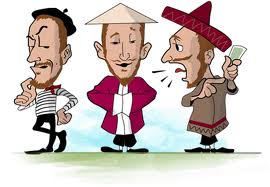 Accents are one of the most powerful tools in a role-player’s arsenal. Using them can make characters stand out at the gaming table, and differentiate between in character and out of character comments. They can also be the difference between a good GM and an incredible GM who truly immerses players in their world. Why narrate a story? Bring out your inner thespian and BECOME your story.

First of all, research whatever accent you’d like to try, or shop around for an accent that you can mimic fairly well. One of the best tools for listening to accents is the internet, specifically videos. Search for “regional dialect meme” on Youtube and you will get a ton of options from all over the world. This meme is particularly helpful because it includes many words and sounds, but it also includes regional terms. For example, is it “soda” or “pop”? These terms can be awesome little details to add to your characters and really unify a group of characters that are from the same place.

Remember, it’s ok if you aren’t perfect at first, and you really will get better as you go. Hell, it’s an RPG! Unless you are playing a historical game, who’s to say your accent isn’t perfect? Maybe the people from that land over the mountains sound exactly like your bad Jamaican accent. There are a large number of Russian/Irish accented characters in my games… who start to sound more Irish as I drink. Go fig.

Accents are regional, not racial. In a recent season of the Happy Jack’s RPG Podcast, another host started speaking like a southern character from one of our games. The character was named Windy Drawers, and he was a sloppy, overeating, unintelligent politician. We instantly started receiving angry emails from people who were upset that we were depicting such an unflattering African American stereotype on our show, however we had never mentioned Windy Drawers’ race on that episode of the podcast. In our game he was actually a rich southern white man, but listeners drew their own conclusions based on their own racial stereotypes. Let me say it again, accents are regional, not racial. They are determined by where you grew up and lived, not by your ethnicity or species.

This is a very important distinction that is often overlooked in gaming… and in the media. The stereotypical dwarf may have a Scottish accent, but if he was raised by elves (oh, the horror!) he will sound more like an elf than his dwarf kinsmen. Humans from different parts of the world should have different accents, and drow should not sound like surface elves… unless they were raised together! A good player or GM will use this in their games. An NPC shows up claiming to be from a local town, but speaks differently than everyone there… clue #1 for the party. Maybe it’s your half-elf’s first adventure with this band and you’re getting to know them along the way? Your Irish/British/Russian/common accent tells them that you were raised by the human side of the family, not the elves. They add depth and complexity to a character instantly, that could only otherwise come from sharing written back stories or long in-game explanations.

Here are some easy tips for mastering an accent:

– Find a phrase that will immediately bring you back into your accent. Usually, this is something very stereotypical that you almost can’t imagine being said in any other accent. For my Irish accent I use the phrase “Jesus, Mary, and Joseph!” because it’s VERY Irish, and it’s easy to fit into many different situations. It’s like hitting the refresh button on my Irish lilt.

– Listen to your chosen accent as much as possible. Watch Braveheart 4 more times, or whatever movie has the accent you are trying to mimic. Audio books are also a great option since they are easy to get and reasonably priced. The more you hear the accent the easier it will be for you to imagine it in your head later when you are trying to use it.

– Practice! The more you use your accent, the better it will sound. Talk along with your favorite movie character with that accent, repeat commercials on the radio or read street signs while you’re driving in the car. I practice in the car a lot because nobody can hear how awful I sound.

– Anticipate what words you are going to use a lot in the campaign and practice them extra! For example, if you are a German spy in a pulp game, you might be dealing with lots of military equipment, location names, etc. You will probably never have to use the words “elf”, “dwarf”, or “dragon”, so stick to what you’ll need. Bonus points for learning and using regional terms or words from their native language!

– Did I mention that you should practice? Seriously, do it. You don’t want your first try at an accent to be while you’re sitting at the gaming table. Trust me on this, I learned this the hard way.