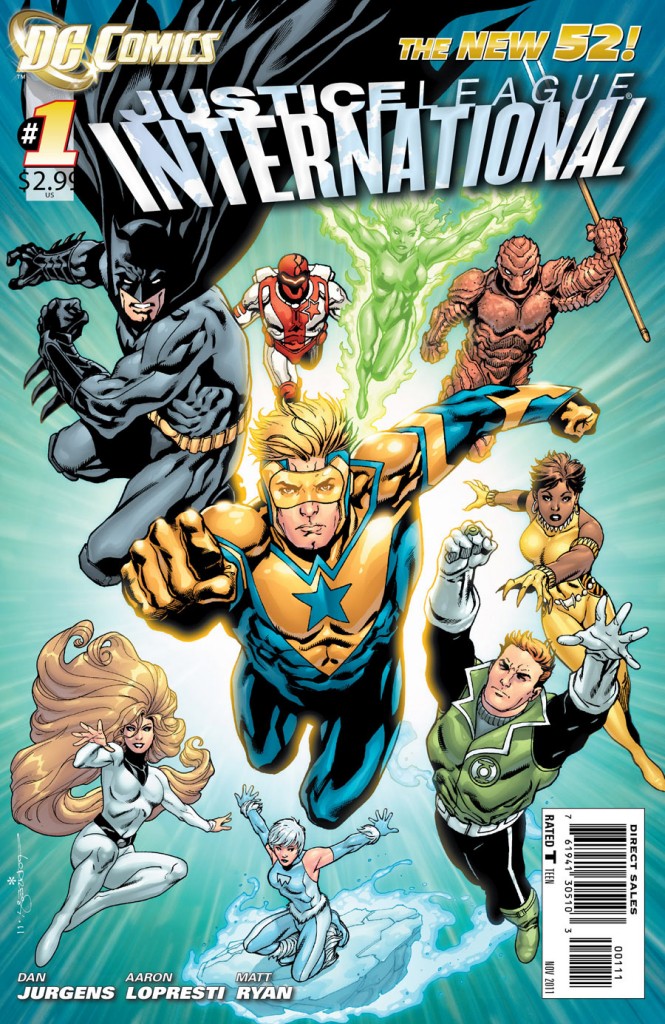 I’ve been very sick this week, so what’s a girl to do when she’s under the weather? Catch up on her comic books while sipping tea and eating soup. Of the many comics revamped for DC Comic’s New 52, I’ve stuck with quite a few: Wonder Woman (duh), Justice League, Justice League International, Aquaman (shut up, it’s really good), Batgirl, Huntress, Nightwing, Batwoman, Teen Titans, Birds of Prey, Justice League Dark (still think it needs a better name), I, Vampire, and Green Lantern New Guardians. What can I say? I spend a lot of money on comics.

You may have noticed that I am still buying all the Justice League titles. I have been a huge JL fan for as long as I can remember. I bought Justice League America, Justice League Europe, Justice League International, and even the short-lived Justice League Task Force religiously for many years. No matter how bad it gets, I’ll probably keep spending my money on anything JL related. I’m very loyal… or a sucker.

I am loving JL Dark. It’s well written and I’m having a blast seeing John Constantine and Zatanna share the pages of a comic. The restarted Justice League is interesting, but it’s lacking in some personality. I hope they start to develop the characters more. I also really hope they start aligning the characters with what is being published in their solo titles. The Aquaman and Wonder Woman of the solo titles do not mesh with what is showing up in the pages of JL. They finally synchronized their Wonder Woman designs at least in the last issue of Justice League.

The JLI is where I’m having serious problems. I really like the characters. Booster Gold has always been a favorite of mine. I’ve been wondering what kind of leader he’d be since he tried to spearhead the corporate sponsored super team The Conglomerate back in 1990. I think he will be very capable eventually, and I look forward to watching him grow into the leader the JLI needs.

However, more than a leader the JLI needs more meta-human POWER. They are seriously underpowered. If Ice is one of your heavy hitters, you know you’re in big trouble. I really appreciate the “international” collection of superheroes they rounded up. It’s nice that the team isn’t comprised totally of Americans and extra terrestrials, but couldn’t they have come up with more powerful political correctness? Hell, the characters even joke about it in the first comic. I don’t understand why the Teen Titans (at this point a rag-tag bunch of kids who are just hanging out together for safety) are ALREADY so much more powerful than an international, hand-picked team of proven superheroes.

However, despite this major flaw, Justice League International is really fun to read. DC is doing a GREAT job with the characters and the dynamics of the team. Godiva is a huge flirt with a crush on Booster, and it’s a good thing her character is interesting because moving hair isn’t exactly a JL level superpower. Booster is his same self-promoting showoff, but he really seems to want to become a good leader. Then there is my favorite unlikely duo, Fire and Ice. I’ve loved them since they joined the Justice League ages (and many costumes) ago. Then Red Rocket returns to the team with the added bonus of August General in Iron from China. These two veteran warriors clash due to the competitive nature of former communist nations. Then there is Vixen to add a little more of an “international” look to the group. Add a dash of Batman to the mix (because it seems he has to be in EVERY New 52 title…) and sprinkle with a bit of Guy Gardner and there you have it! The JLI! Full of drama, ego, flawed characters, and sketchy motives. It’s really fun to read, even if you don’t really believe they’d be able to save the world.