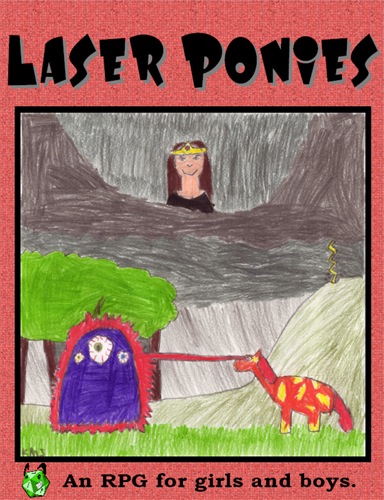 “Feel the Pony Power! On a faraway magical world, in the heart of Glitter Valley, there lives a tribe of beautiful creatures known as the Laser Ponies.” – Hex Games Website

Hex games created this very simple RPG in 2009. Laser Ponies is aimed at very young players, but it is still a pen and paper RPG that requires basic math skills and reading ability. I’d suggest it for ages 7 and up. I happen to be running an X-rated convention game for adults, but that is just because I’m very broken. Using the NORMAL setting for Laser Ponies makes for a fun, family-friendly, imaginative gaming experience.

Yes, Laser Ponies gets a 10 out of 5 for cost. How is that possible? The PDF costs $1.99… YES, ONE DOLLAR AND NINETY-NINE CENTS! You get a complete RPG game for less than a cup of coffee at the trendy, overpriced location of your choice. Your dice cost more than this whole RPG.

You can buy the PDF at DriveThru RPG and you get all the information you need to run a Laser Ponies game from the single book. The Quick Start rules are in the back of the book and give you an easy run-down of character creation and combat.

As a female gamer, I am thrilled that this game exists. I think it’s a great gateway RPG (drug) for kids, ESPECIALLY HORSE-CRAZY LITTLE GIRLS! I would have loved playing this RPG between my weekly riding lessons. I am (correctly) stereotyping girls, but I think games like this one are the way to increase the number of females gamers. Get ’em into the hobby while they’re young! Boys are sure to enjoy this system too because there are monsters, bears, and friggin’ laser beams!!

The premise is really simple and sweet. Very sweet. It will give any adult cavities. It’s a great game for kids though and harkens back to the simpler times of Candy Land… but with lasers. The ponies live in a magical world called Panagonia. Their homes are in Glitter Valley, which is a peaceful but surrounded by scary forests and some mountains. The bears and monsters are the enemies of the ponies, while the beavers and badgers are their allies. The only human is the evil Chasm Queen who is basically the big boss the ponies need to take down.

Again, it’s a game for kids. I’ve had a lot of fun twisting it to my dark purposes for my adult convention game, but it really is a cute setting for kids.

Note: The game even comes with tables of story ideas, so young GMs can have some helpful ideas of where to take their game. What a great idea!

Character creation is very simple, and the Quick-start guide in the back of the Laser Ponies book can easily take you through the process. It only takes about 5 minutes to roll up a character, and even less if you are an adult. It’s really simple. I do suggest that you help kids during character creation, simply to because the reading level of the directions might be a little high for the average 7-year-old… Sorry! Your kid is not average! I get it! They are the next Einstein… help them the first time through anyway.

There is a high level of customization available in this game through the use of “gimmicks”. You can give your pony any perks you want, magical or mundane. The book gives amazing speed, invisibility, prophetic dreams, lucky, and many other examples of good gimmicks. The higher your gimmick level, the more likely that you will succeed in your roll. However, your gimmick level is equal to your weakness level. Weaknesses have to be something that majorly impacts the character, such as bad aim, unpopular, phobias, smelly, etc. Your pony might have incredible powers, but they are no good to him/her if nobody will get within 100 yards of them because they have a habit of sleeping in their own manure. The more powerful the gimmick, the more powerful the weakness.

These gimmicks and weaknesses are approved by the GM to insure they aren’t going to ruin the adventure. It’s really fun coming up with ideas for these and I can picture kids having a blast during the character creation phase. Plus, you get to name and design your pony!!! Mine may or may not have been named Sugar Cube and had little Pegasus wings…

Combat is very fast and simple and reminds me of Wild Talents in many ways. It’s split into rounds, but there is no specific amount of in-game time in a round. The GM makes the call if something really complicated takes multiple rounds. The GM goes around the table and each player declares their action, then the GM has everyone roll in the order that makes the most sense depending on the actions. It’s a d20 system, if the player rolls less than or equal to the characters number, the action succeeds. There are exceptions and specific circumstances where the rules get a little more complicated, but not much. It’s very quick and can be very fun since players get to imagine their own attacks instead of using preset attacks from a book.

I gave Laser Ponies a 4 out of 5 for ease because kids will need some help reading and understanding the directions. It’s very simple and kids will catch on very quickly. I highly suggest teaching them in-game instead of reading through the rules with them and trying to make them understand from the text alone.

From the pony’s mouth…

You may think my scores are very forgiving, and you are right. No, I would not choose to play Laser Ponies over Wild Talents or other systems aimed at adults… unless I wanted to have a game night with my god-daughter Allegra. Laser Ponies is perfectly tailored to its chosen demographic. I highly encourage my fellow nerds to pick up a copy to share with their young kids. It’s well worth the $1.99, even if you only play it once. It might turn your Bratz-doll-loving daughter into a tabletop gamer.

If you’d like to try the Laser Ponies system with a more adult setting, I suggest you pick up the Q.A.G.S. (Quick Ass Game System) book. It is the basic system that Laser Ponies is built around, but is much more in-depth. I bought and flipped through the QAGS book and was really amused by it’s writing and illustrations, but I haven’t studied it at length. It is available from DriveThru RPG for $7.99 and includes more detailed options for point-based characters and advanced player combat.