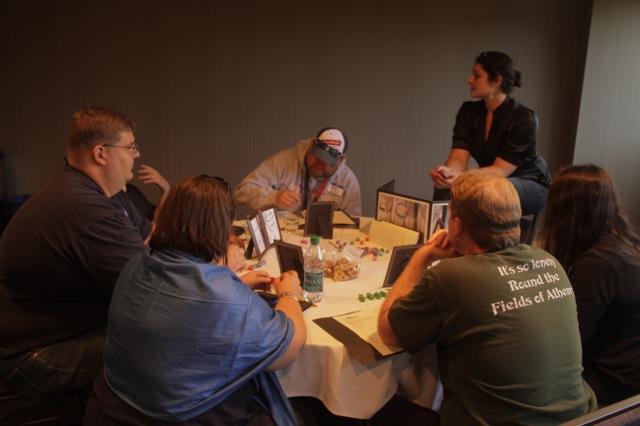 I have GMed many convention games, but I ran into a new problem a few months ago. One of the players in my game had a fundamental misunderstanding of a pretty simple scientific principle. I will not go into specifics because I do not wish to embarrass that player or narrow down which game I am discussing.

The players were engrossed in the game and having a blast trying to come up with a solution to my challenge. They were all great people and it was a very positive game, however suddenly one of them suggested an action that defied the laws of physics. Two other players jumped on board, and the remaining players looked at me with their eyebrows raised.

I casually asked for clarification, hoping they’d catch the mistake themselves. No luck, so I very politely questioned their logic, asking if that was really what they meant to say. Surely, their basic elementary school knowledge was just a little rusty, right? Wrong. They defended their position, restating their faulty understanding of earth science. The logic behind their actions was sound, they just didn’t state the right materials to do what they wanted. I was at a crossroad, do I impose my scientific understanding on the game to insure it’s correct and risk embarrassing the player, or roll with it and prioritize fun over academic correctness?

Against ever instinct in my teacher body, I rolled with it. Why? Well there were two main reasons.

First, I didn’t want to penalize the characters for the players’ ignorance. They had found a good solution, but simply did not have the scientific background to choose the right materials to make it work, even though the materials were available to them. Often we play characters with knowledge or qualities different than our own. Shy players can roll skills to give speeches and technology dummies can roll to hack computers, so it didn’t seem fair to kill their creative idea when their character would have known exactly the right material to choose.

More importantly, I didn’t want to kill the fun. It was a one shot game with people I didn’t know well. If it had been my normal gaming group, I might have argued the point and then bought the player a beer. I didn’t know these players well enough to push them. They might have gotten mad and walked away, or been perfectly polite but not enjoy the rest of the game. We were all there to have a good time and it seemed pointless to risk that over a small mistake in their plan. That said, if this had been a campaign I would have pressed the point because I wouldn’t want the physical laws of my universe to be altered long term, but again, I would know players in a campaign game enough to debate it with them.

Did I make the right choice? I still ponder that question. The game finished smoothly and everyone seemed to enjoy themselves, but maybe they would have enjoyed themselves if their plan had failed. It really boils down to an individual’s personal goals for the game. Mine was for my players to enjoy themselves, and I succeeded, but I might not make that same choice again.

Oh, and after the game I casually brought it up to the player privately and suggested they look it up when they got home. The teacher side of me couldn’t give up completely.