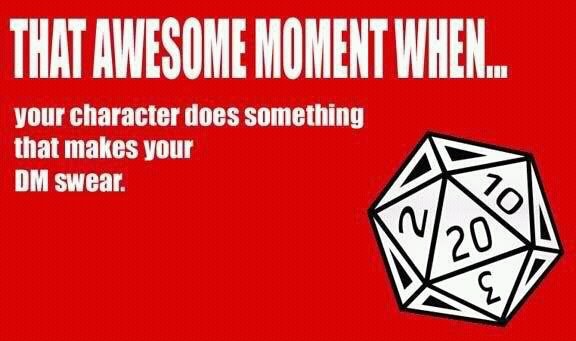 We all have seen players completely take their GM by surprise. Usually, the GM has planned one or two specific ways for the players to handle a challenge… and the players try something completely different. This creates a crossroad for the game. Is the GM willing to consider alternative solutions to the problem?

The answer should be “yes.”

I’m not saying that the GM should always give in to what the players want, but they SHOULD be open to considering logical solutions other than the ones they planned. When the players’ options are allowed, the game changes from the general mice in a maze scenario to a game where players are empowered. The players can stop looking for the “right answer” and really approach the problem from their character’s point of view. The mere possibility of creative success supports the role-playing aspect of a game. As a GM, there are some important things to keep in mind with this concept. Mainly, just because you let the party try something, DOESN’T mean it has to work. Maybe their logic is off, maybe there are some factors they aren’t aware of, or maybe they just roll badly. Let them try it, and let them pay the consequences if they fail. However, if their logic is sound and they roll well, they should be rewarded with success. They shouldn’t fail just because it’s a different solution than you planned.

I saw a great example of this in a recent Pathfinder game. The party was on a pirate ship and planning a mutiny, but they wanted to take out as much of the enemy crew as possible quietly. They decided poison was the best way, but none was available on the ship. They came up with the idea of summoning a viper and milking it for its venom. Although the summoned creature only materialized for a short period of time, they rationalized it by citing the rules that stated anyone poisoned by the viper would stay poisoned after the animal dissipated, thus, the poison didn’t dissipate with the creature. The surprised (and delighted) GM ruled in their favor, and a bunch of cruel pirates died mysteriously after their nightly ration of rum.

Keeping your game off “rails” will really benefit the players and the GM. It will encourage the players to explore the world that you create, and to deeply embrace the character that they are playing. The GM gets to enjoy watching the players revel and fully explore the universe they created.

The Legend of Drizzt Board Game
Dealing with Player Ignorance
Comment