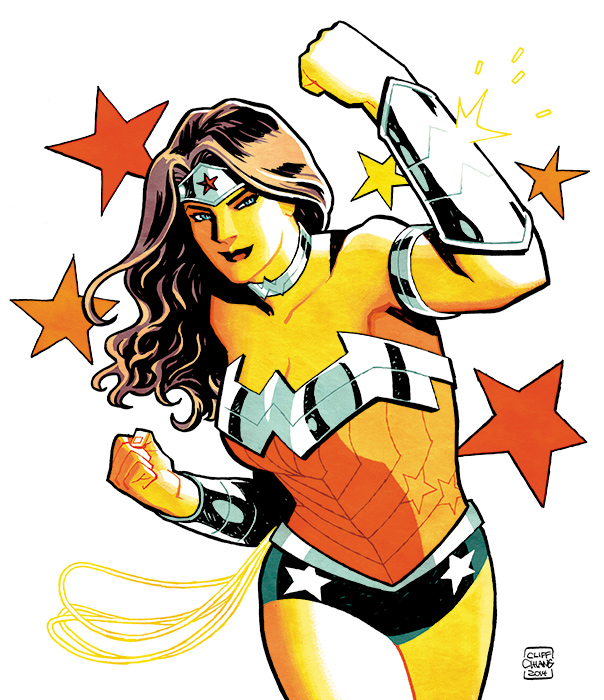 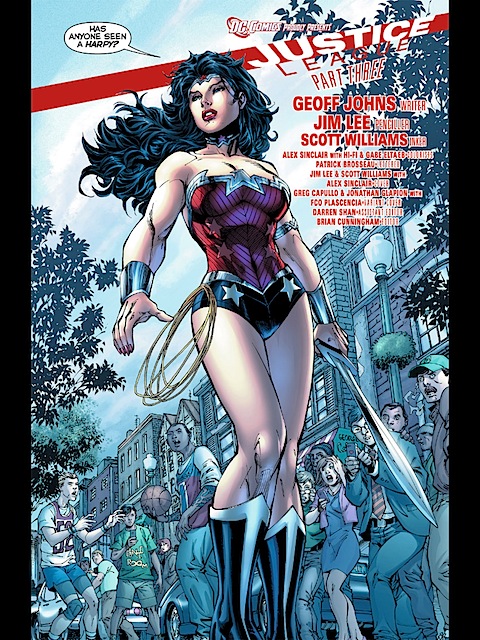 DC can’t seem to make up its mind about Wonder Woman. It took their artists a few months to unify her costume design across all their titles, and it seems like Wonder Woman and Justice League take place in completely different universes, but that isn’t my biggest problem with the rebooted Amazon princess. My biggest problem is that Justice League can’t seem to give Diana any personality at all! As someone who has been a die-hard Justice League fan (Europe, America, International, all of them) since I was a kid, it’s really pissing me off.

Now, it can be argued that there are problems with a lot of the newly rebooted characters in Justice League, however at least they are stand alone characters. Justice League’s Wonder Woman is completely defined by her male relationships, starting with Steve Trevor. At first, she was an ignorant meat-head looking for a fight and eating ice cream. Only Steve was able to keep her from smashing everything Hulk-style, despite the fact that none of the other heroes need a handler. Why does a character as smart as Diana (should be) need a man to constantly remind her that it’s not ok to go wandering around swinging a sword in public? Even after growing up on Paradise Island, she should be able to figure that out after a few days. Somehow they managed to make her vastly powerful and completely dependent on a non-super-powered man, all at the same time.

Unlike the Diana in Brian Azzarello’s Wonder Woman run, the Justice League Wonder Woman seems to be completely lacking in emotional depth. Azzarello shows us an edgy Diana who likes to hang out at rock concerts, is bitter about being teased as a child, cares deeply for her companions, and bravely faces the gods to protect the innocent. The only thing we have seen from her in Justice League is a sudden, desperate concern for Steve in Issue #11, which seems to come out of nowhere despite their prior relationship. Diana has shown almost no emotion on the matter up to this point, unlike Steve, who has been driven to drink because of their breakup. Why is it that a side character without powers, and who has been in significantly fewer panels than Diana, has so much more emotional depth? We have gotten more personality information out of Green Lantern’s one liners than from all of Diana’s lines combined, but we are CONSTANTLY reminded that all the men in the world envied Steve for being Wonder Woman’s boyfriend. Her defining characteristic, and certainly her most mentioned attribute, seems to be her hot body.

Now she is hooking up with Superman. The relationship makes sense from an outside standpoint, but it has completely baffled many people who are actually following the comic. A few panels before the now-infamous kiss, Diana was desperately trying to save Steve, then decided to put even more distance between them to keep him safe. There have been hints that she cares about Steve and that she only left him to protect him from her dangerous lifestyle, but this tiny bit of character development is thrown out the door. BAM! The same night that they get home and Steve is laying in the hospital, Diana ends up making out with Superman on a rooftop. Can we say “pathetic PR stunt?” I’m not against a Superman/Wonder Woman relationship. I LOVED them in Kingdom Come, however this time they didn’t bother with the character development to back it up. We’ve all suspected they’d become an item since the reboot because they were both suddenly single, but there should be flirtations, hesitations, lingering glances, emotional commonalities… SOMETHING to back it up. A two page conversation about how they are different than normal people because of their powers, which I believe is the first one-on-one conversation between them since the reboot, and then a dramatic final panel kiss is just lazy writing and bad character development. But DC got tons of press, so who the hell cares about the characters, right?

I think the worst part of the Justice League reboot (yes, worse than the only female character’s complete lack of personality or ping-ponging her from man to man) is that this Diana is so inconsequential. She is completely reactionary, like so many female comic book characters before her, and seems to serve little or no purpose other than being the token woman of the group. She never comes up with ideas or shares opinions. She doesn’t stand up for the weak, or worry about the civilians when the team is busy leveling cities to take out bad guys. She hasn’t displayed any powers or characteristics that are indispensable to the team, and, despite devoting her life to warrior training, Batman still makes all the tactical decisions. There was a time when Diana was an undeniable part of DC’s trinity, but now even I, a life-long Wonder Woman fan, have to admit she’d be the first one I’d cut if I ran the team. Azzarello’s Diana faces the gods single-handedly, and you really believe that she could win. He even threw in some new powers to match with her electrifying new back story. Like the changes or not, at least she is bad ass enough to stand on her own. 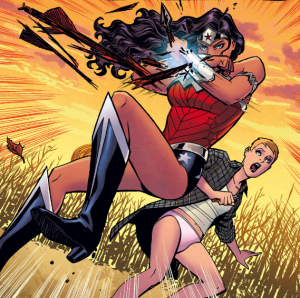 I am constantly surprised by Azzarello’s Wonder Woman run, and although I don’t like all the changes he has made, am really enjoying the unexpected darkness of his universe. His Wonder Woman is an edgier Diana, who has some surprises up her sleeves… or bracelets! She is smart, complex, and proactive. Even without mentioning her powers, she is an interesting character. I hope that the Justice League writing team takes their cues from Wonder Woman and starts to rethink their approach to the most famous female character in comics.