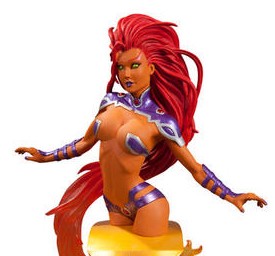 I wrote this post back in Fall of 2011 after DC’s New 52 had just been released. I was furious at all the internet uproar about Starfire’s new look and personality, most of it posted by people who didn’t know a thing about the comic book starfire vs. the cartoon version. My great friend Amy let me post it on her blog “Geek with Curves” since I didn’t have a place to share my opinion.
. . . . . . . . .

There are a lot of male letches, jerks, and crazies in the comic book world, even among its heroes. Guy Gardner is the classic example, but there are many men in the comic universe who aren’t shy about their sexual exploits. Starfire has always been a very sexual character and it has always been clear that people on her home planet are not monogamous. Why are we upset that a woman treats sex as casually as other male characters? This comic is clearly not meant for children, so we do not have the issue of her being a bad role model. Do we expect all of heroines in comics to be perfect, beautiful, monogamous examples of women? In the end, are we asking them to make their morals and personalities as flawless as the scantly clad bodies that we point out are unrealistic?

Which brings me to….

To me, the new Starfire is flawed. She is incredibly shallow, but I know people like that. It’s sad, but true. We can all name at least one woman that we know who fits the description of “slut”, so why is it so hard for us to swallow that concept in a comic? It is a realistic flaw that really occurs in society, sometimes due to emotional problems. People have pointed out that Starfire’s behavior is similar to a rape victim or someone who has been through some other trauma. Well, Starfire was enslaved by her older sister and sexually exploited. Maybe she should have been acting this way the whole time. Maybe this is more realistic, albeit unpleasant.

And to clarify, the names she lists off in the infamous beach scene are not all her ex-lovers; they are members of her old superhero team… who she doesn’t remember because of her alien memory. I guess it’s better than a retcon? At least they didn’t un-marry her like poor Superman and Lois Lane.

Be a Good Geek not just a Geek Girl

If you are going to be mad that they changed Starfire as a character, more power to you, but don’t be mad about it just because of her gender. Gender bias is what we are fighting against! If the entire female comic community gets upset every time they change a female character, we are doomed. It won’t take long before comic companies start avoiding the bad press by never taking chances with female characters, or worse, keeping the number of female characters as low as possible.

If you really want to help, be a POSITIVE customer. Vote with good press about the books you like, bugging them for new female characters to support, and by BUYING the comics you like. Once you write off a comic company, they do the same to you.

Also, support female comic writers and artists! BUY THEIR BOOKS! Contact the big companies and say that you’d love to buy comics drawn by so-and-so. Getting more women into making comics will help the quality of the female characters in the comics. When it comes right down to it, the almighty dollar is king in the DC universe. Spending money will always be heard over the din of the Internet.

And because I’m a major geek…

Please, enough with comparing the cartoon Starfire to the one in Red Hood. Please? The Teen Titans cartoon is not a good basis of knowledge for Starfire. It was a character more inspired by the comic Starfire, than an actual accurate portrayal. Yes, people who watched the TV show might be upset if they read Red Hood. They may also be upset when they read older comics and learn that Kory was enslaved, sexually exploited, had her family destroyed, practiced free love on her planet, and that she got her starbolts as the result of being a guinea pig in forced alien experimentation… and her new comic outfit is just as skimpy as her old outfit! 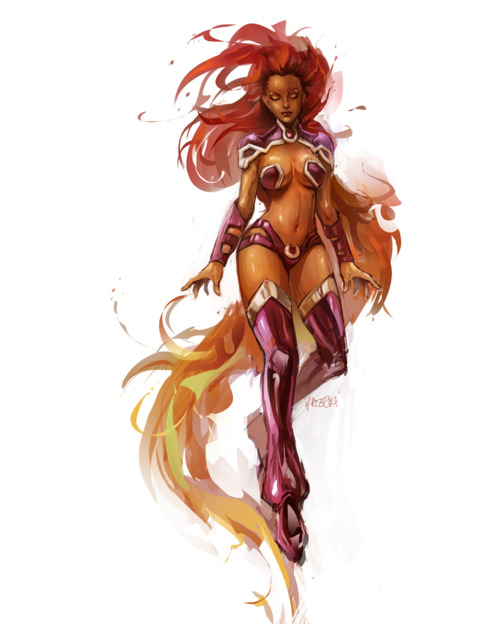