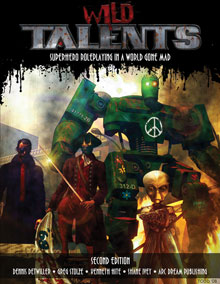 A review I wrote in March of 2011 for The Douchey DM, my friend Stu’s gaming rant-blog. It is also the official rant-blog of the Happy Jack’s RPG podcast. I had just run my first Wild Talents game at OrcCon 2011 with my buddy Frey. I have since run the system at other cons and my Salem Witch Trials game has become the stuff of Happy Jack’s legend. Enjoy.
. . . . . . . . . . . . . .

At OrcCon, The Amazing Fray™ (also known as Fray) and I ran a new-to-the-Happy-Jacks-crew system called Wild Talents. It is a system specifically designed as a superhero RPG. Arc Dream Publishing released it in December of 2006.

This is my n00b friendly review of that system. I’ll be breaking the game down into four basic categories and then giving an overall opinion, a format I hope to follow with all my future game system reviews. Basically, I’m going to share my opinions on new-to-me systems so people who haven’t played them can figure out if they are interested. This is not a player guide! You do not need to know how to play the game to comprehend this review. A complete explanation of how to play can be found on the Arc Dream website. I won’t bore you by rephrasing what someone has already done a great job of writing. If you are interested in the system after reading this blog post, check that out… or buy the damn game.

This system is nice to your wallet, especially if you plan on designing your own world and adventures. Fray and I ran our game with the compact Wild Talents Essentials Edition. The Essentials Edition is all you need to create and play a Wild Talents game! It includes the very basic character creation and play mechanics. It’s a paperback, the pictures are in black and white and it’s easy to fit in your purse (because I know you were all wondering that!) The book runs around $10 and is available on multiple websites, including Amazon and Arcdream.com. The PDF of the Essentials Edition is available on RPGnow.com for $5. They even have $5 versions of this edition for the Kindle. Geektastic!

Wild Talents does have a pre-designed setting and adventures too. Information on them is not included in the Essentials Edition, so the cost goes up a bit. The full Wild Talents Second Edition costs around $50 (it’s on sale on Amazon for $32.90 right now, only 12 left!), or you can pay $30 for the PDF. There is no Kindle version. Again, this is the only book you will need to run a game. This book is hardcover and has full color artwork inside. It’s the normal size you’ve come to expect with RPG books. Second Edition is thicker than some DnD books, but not as thick as HERO. Hmm… maybe I shouldn’t compare sizes… size doesn’t matter…

Wild Talents is a superhero game, but it’s really flexible. With some work you could use the mechanics to create any type of game, although why reinvent the wheel when there are tons of great systems out there for other genres? The feel of a Wild Talents game is easily customized by point limits. The books give lots of tips about designing the feel of the game you want. If you are the type of GM who loves to let your imagination go “wild” (haha), you will like this aspect of the system.

GMs who like to use pre-generated worlds and adventures (often known as “Guy with a Day Job” or “Dad”) will do well with this system too. There seems to be plenty to choose from for Wild Talents. The Second Edition is a follow up to the setting in Arc Dream’s other game GODLIKE, where super-powered humans started to appear during WWII. It’s a crazy place where supers come in direct conflict with one another. This Favored Land is a sourcebook that sets up the appearance of supers during the Civil War. There are other sourcebooks for Victorian London settings and modern games that include sorcerers and the occult. I have not played in any of these settings, but I love the variety. It seems like there is something for everyone. The extra sourcebooks and adventures are available at Arc Dream’s website.

Customization: If you can dream up a super power, you can make it in Wild Talents. The books have a good bank of pre-generated powers to select from and include point costs and which dice to roll. If you want something specific that isn’t on the list there are directions for creating your own powers. Creating powers gets a little complicated. You can get any powers you want, but it takes a little work. It’s still nothing compared to systems like HERO. Stats and skills are easily customized to fit a character’s role and back-story by spending points.

Ease: Really this system needs two scores for ease. One for if you design your PC from the pre-generated power bank and another for if you get your hands dirty and create your own powers. Creating a character with the pre-gen powers is a no brainer. Pick and choose what stats/skills/powers you want until you hit the point cap the GM set. If you create your own powers you will spend more time and brainpower (and money on beer), but you might come up with something really unique and amazing. It adds complexity to character creation, so it lost a point there.

For the GMs: Wild Talents also lost a point in Ease because of how difficult it can be to keep the game balanced. It is a DEADLY system. One extra die and a PC or NPC will be very over powered. Fun system and easy to run, but play test if it’s your first time. If you are having your players create their own characters, check them before you play. It’s a system that can easily be min/maxed (and they admit that), so be sure you know what you’re in for and can plan accordingly (or nerf the hell out of them!)

I love the combat system in Wild Talents. The game uses the ORE (One-Roll Engine) mechanic and it really speeds things up. Our game had some of the fastest combat rounds I have seen, and the players were actually MORE interactive than with other game systems. First, the PCs and NPCs all declare their actions. Everyone is listening and paying attention because what other players say might change what you do. I noticed this seemed to increase the amount of teamwork the players used (without meta-gaming) because they didn’t have to wait for their turn. After that, everyone rolls their dice at the same time. The dice then determine who beat whom, succeeded, failed, etc. Rinse. Repeat. Very fast, interactive and fun for most groups.

The dice mechanics seem more complicated than they actually are. There are multiple types of dice and each drastically changes the power of a roll. I suggest everyone learn while playing a game. It seems really simple when you’re at the table. There are very specific dice and effects for different power types, so put some notes on the character sheets and have a book handy. After the first combat, everyone pretty much knows how their powers and dice work, so its smooth sailing from there. The regular dice mechanic is interesting since you are looking for matching die instead of adding them together. We will need further testing to determine if this makes it easier or harder to play while drunk. Volunteers?

Overall, Wild Talents is a great system. I think it’s especially good for convention games since it is very fast paced, and easy to learn. We got nothing but good feedback about the system from our players. I will definitely be running more Wild Talent games at future conventions and buying a TON of d10s.

PLEASE NOTE: If you create Radioactive Cheerleaders for a combat, the players will find a way to skip them EVERY TIME YOU RUN THE GAME. Not kidding. What a waste of spiky pom-poms of death…