The new trailer for Wonder Woman dropped this week, and I have to admit that I loved it. I officially have hope again and am REALLY looking forward to this movie, even after all the disappointments DC has brought to the screen and all the rumors about production troubles. I’m not too proud to admit that I actually cried a little when I watched it.

Watch the trailer before you read the rest of this article. If you’ve already seen it, proceed. Be aware that my observations and suppositions might end up being accurate spoilers.

Water. Pretty blue water… and then we see Themyscira, a.k.a. Paradise Island. They have completely nailed the look and feel of Wonder Woman’s island home, with Greek-inspired architecture and a majestic natural beauty. White peacocks roam the island, a symbol for the Greek goddess Hera who is a patron of the Amazons in many of the Wonder Woman comics. We see a few shots of the city that really give it scope and depth. It should also be noted that the footage on Themyscira is bright, with rich natural colors, a striking contrast to the dark look of DC’s movies so far. Hippolyta’s (Wonder Woman’s mother) voice over speaks of the “many gifts” the gods have given them, implying that the whole island is a gift, and hinting at the Amazon’s backstory. It also segues perfectly into…

Hippoyta shows Diana a collection of guarded weapons from the gods, focusing on a sword with which young Diana is immediately obsessed. It’s unclear if this is a cannon weapon from the DC Universe or something created just for the movie-verse. Many reports call it the God Killer, which matches the name of a sword from Deathstroke’s comics that was forged by Hephaestus (paving the way for some possible interaction between Wonder Woman and Deathstroke in future films?) however Wonder Woman never had that sword in the comics. I think a better bet is the sword that Wonder Woman wields in Kingdom Come. That sword was also a gift from Hephaestus and is famous for being sharp enough to split atoms and make Superman bleed. It’s a god-killer sword, not THE God Killer sword.

There is some debate about the conversation between Hippolyta and Diana in this scene. Why is Hippolyta already putting down her daughter by saying she isn’t worthy of the sword? There are many explanations, but the most likely one is pretty obvious: Diana is Hippolyta’s only child. I’ll talk about her birth a little later in this post, but Hippolyta loves Diana and wants to protect her. Training her for war, just in case, and encouraging her to participate in war are two very different things. Any Amazon who uses that sword will not be training; they will be fighting the most

powerful foes on the planet. Also, in some runs of the comic, once Diana leaves Themyscira she is not allowed to return, thus forever separating her from everything she has ever known. Why would Hippolyta want that for her daughter? In almost every version of Wonder Woman’s origin story, Hippolyta is proud of her daughter but also heartbroken that she will not live a peaceful life on Themyscira. Hippolyta is NOT A BAD MOTHER!

0:26
Next we see Antiope training a teen version of Diana. This is thrilling because it means they will (hopefully) be spending some time on her backstory on Themyscira. We’ve seen Batman’s parents die at least twelve times on screen, so it’s nice to hope that we will get a good origin story for Wonder Woman after all this time. Growing up on the island is pivotal to Diana’s overall character. She has lived in a utopian society! She knows that it is possible for a warlike culture to find peace, because she has experienced it firsthand. This is how she is able to look past the horrors of the real world and continue to believe that there is hope for a better future… at least in the comics. 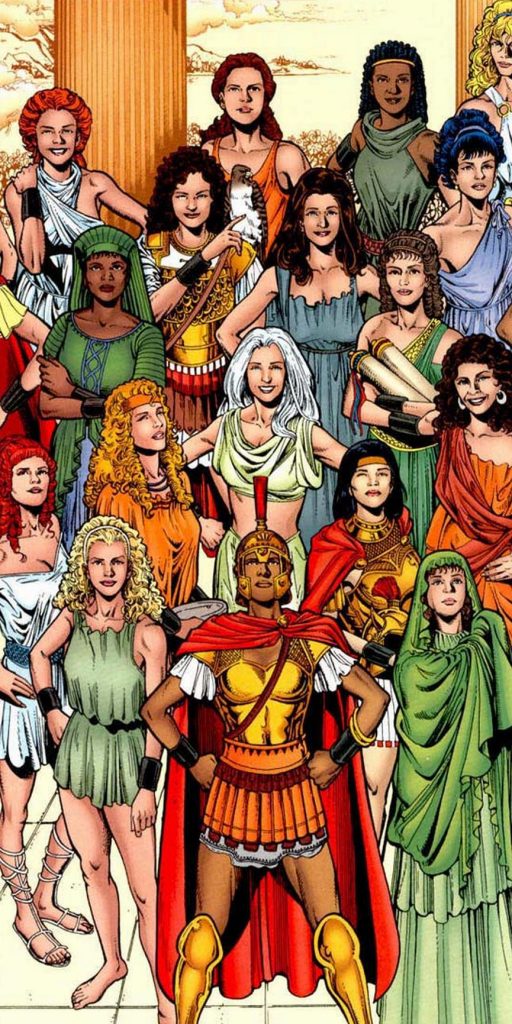 Adult Diana is training in a field with other MULTI-RACIAL AMAZONS. This makes me really happy since I grew up on George Perez’s Amazons, which came in all races and colors. So far, all of the stunt work and fights look incredible! Diana pulls some really amazing moves, but Antiope still gets the upper hand and forces her to the ground. Antiope rips into Diana for her failure, only to be blown off her feet by a mysterious blast of energy when Diana throws her arms up to protect herself with her metal bracers. As Diana stares at her bracers in shock, we hear Hippolyta say, “But she must never know the truth about what she is.”

This is causing some waves because it is not a traditional power in Wonder Woman comics. Wonder Woman was the only child of the Amazons who were blessed by the gods but had no children in their civilization. Hippolyta was so desperate for a child that she molded one out of clay and begged the gods to bring it to life. Thus, Diana was created and blessed by the gods with super powers. In 2011, the New 52 t 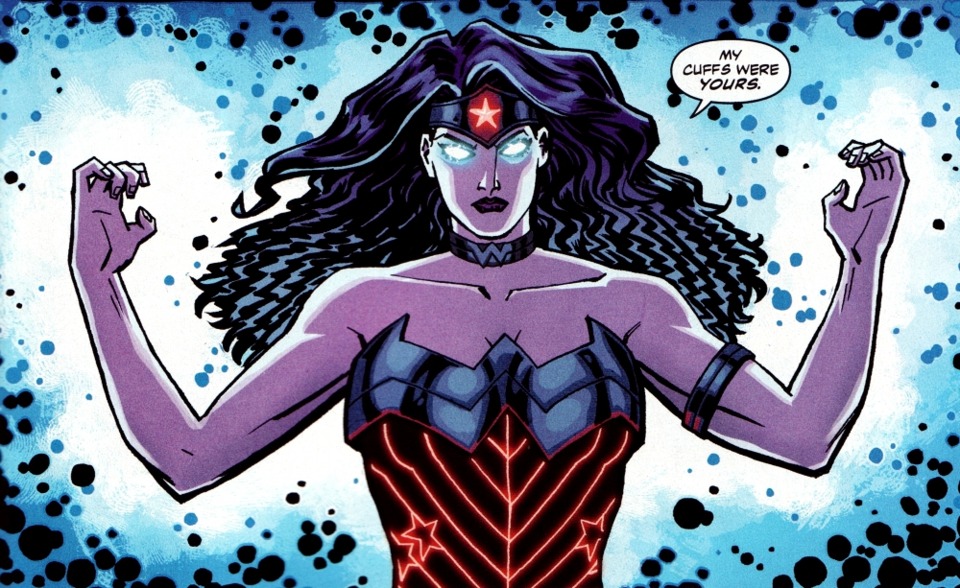 wisted that story into a lie told by Hippolyta to cover up an affair she had with the god Zeus. As an illegitimate demi-god, Diana takes after her father and has electric powers that she can’t quite control. Her magical bracers block her electric powers so she can function normally. The movie seems to have gone with that power set, although there is no saying what that means for her creation story. Personally, I’m really hoping they stick with the clay version of their origins.

0:53
Adult Diana watches from a cliff as a plane crashes into the ocean near the island and dives in to investigate. Steve Trevor is brought to the beach and she stares at his unconscious form in wonder. We’ve seen this in other trailers but it’s still exciting to see such a classic moment brought to life. 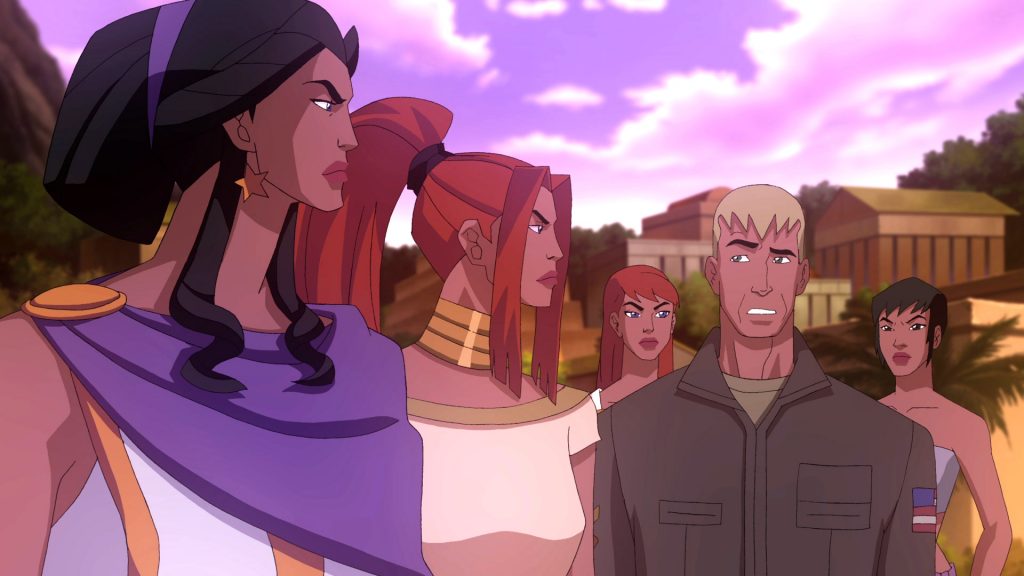 Cut to Hippolyta’s throne room (is this Steve’s trial for trespassing?) and then to Steve in a dark cave (prison cell?) with Diana explaining to him about the Amazon’s mission to defend the world. This has confused people, because how are they supposed to defend the world if they never leave their island? Well, in many of the comics, Themysira is where the gods placed the entrance to the underworld. The Amazons sacred duty is to protect that gateway. Is that what that line is referring to?

1:05
War obviously comes to Themyscira, but it’s impossible to tell by these quick shots at what point in the story it happens. The bad guys are obviously not just your typical “evil” Nazi rip-offs. They seem more like Hydra (yes, I know that’s Marvel!) with weird looking hench(wo)men and super powerful weapons. Are they after the weapons on Themyscira? The gateway? Or do they just follow Steve and stumble upon the island in the beginning? So many possibilities! 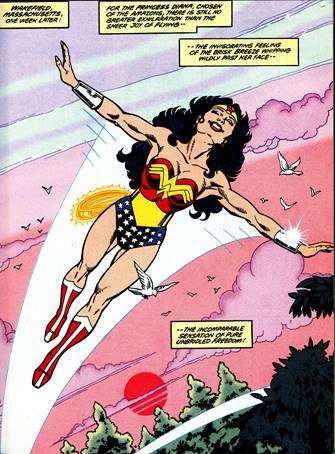 1:15
Diana FLIES … or super jumps… into the vault where the Amazon’s gifts are kept and claims them as her own: the sword from the first scene, a golden lasso, and her famous red and blue outfit. Now that she’s properly dressed, let’s head to the real world!

1:21
Diana is in London, and she is not impressed. The shots and colors do a great job of contrasting the pollution and corruption of “man’s world” with the bright beauty of Themyscira, and sets the tone for the “fish out of water” feeling that Wonder Woman has in many of her origin stories. Sadly, it looks like the rest of the film continues with the dark gritty look of previous DC films after this point.

Diana hides her armor with a secret identity outfit, complete with glasses. I think this is great and fits in with the original comics perfectly. Despite her new threads the trailer sets us straight when she saves Steve from a bullet, she may be dressed like a secretary but she is still a warrior!

1:30
Now we have a montage of epic shots set to music! They are fast but there are flashes of important things! We see:

1:57
The voice over in this part is especially good. Calling herself “Diana of Themyscira, Daughter of Hippolyta” is perfect.

2:08
Now we have the logo and the electronic sounding music that is her theme. After the STUNNING music in the rest of the trailer, this crappy theme is jarring and out of place. FYI: I am a music snob and have hated this theme from the beginning. I blame Zack Snyder. 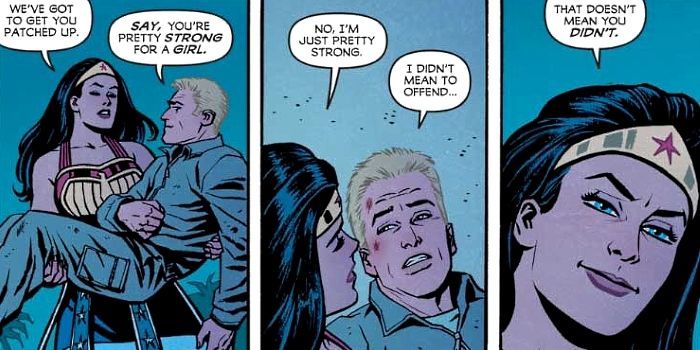 We get a final glimpse of Diana trying to get through a rotating door with her shield and sword, then snarky comments about the sword not going with her outfit. It’s a cute bit, but is desperately designed to show that there are lighthearted moments in the film. Personally, I hope that the movie’s humor doesn’t just consist of jokes about how Diana isn’t “girly.”

Based on DC’s previous movies, there is a good chance that the movie will still be horrible. I know that in my heart of hearts, but this trailer hit it out of the park. It may have just been expert editing, but maybe this is a good reflection of the final product. Dare I say it? I finally have some hope!