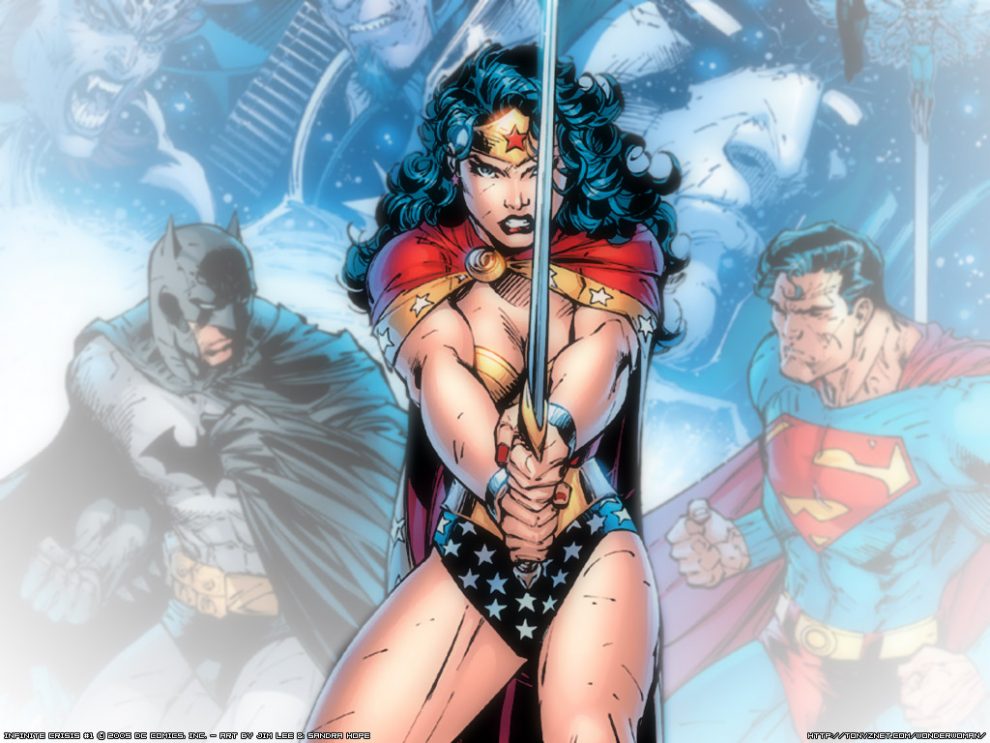 Rumors about the Batman vs. Superman movie, now called Dawn of Justice, have been flying around the internet for months. I was thrilled that Wonder Woman was rumored to be in the film, then had a mixed reaction with the official casting, but I’ve always known it would be the outfit that would really make or break my hope for this film. Now, thanks to JoBlo.com, we may actually have some hints at the direction they are taking Diana in the DC movies.

The reports of Wonder Woman wearing the pre-new52 jacket and leggings outfit are inaccurate. Completely. The description of the outfit from our source uses the term “badass” on multiple occasions. This Wonder Woman is ripped right from the comics and has a “traditional, yet sleeker” costume that’s “battle ready.” She’ll have a blue leather skirt, silver-armored cuffs that reach to her elbows, golden tiara (with a design of some sort in the center, possibly the red star) and a variation of the traditional-looking red top (no word on additional armor on it). Her overall appearance is described as “Amazon warrior princess” and definitely not an urban reimagining. She’s there to kick ass and that’s readily apparent. Word is that WB is getting a VERY positive response on her appearance to those they’ve shown it to.

HALLELUJAH!!!! THIS MAKES ME SO HOPEFUL AND EXCITED!!! This sounds very similar to some of my favorite Wonder Woman designs, but it also may give us more hints about the movie. A “traditional” and “battle ready” design suggests that they may be keeping her back story intact, which is hugely important to fans. It also sounds like she is going to be a powerful fighter herself, rather than eye candy to hang on Superman’s arm.

That’s right, not just a golden lasso here. Wonder Woman will have no less than FOUR weapons, including shield, sword, spear, and of course, the traditional lasso. It’s also noted that she will wear the shield on her back, 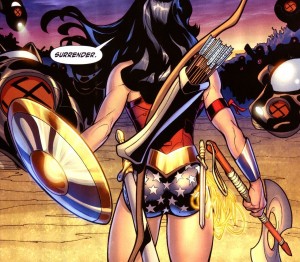 Captain America style, when not in use.

Did you read that?!? GOLDEN LASSO!! If these rumors are to be believed than this is another sign that they are staying true to comic book Wonder Woman! It is also a great sign that they are arming her with the most common weapons that she is portrayed with in the comics. Now to wait and see if the lasso retains the magical properties it traditionally has.

Her character will be introduced as “Diana” in the film initially before we ever see her as Wonder Woman. She will have a fair amount of screen time and will team up with Batman and Superman for the final battle against an un-named villain who may be working or controlled by Lex Luther. Her origin will be intentionally vague, but she is brought into the fold to show that there are other superheroes in the universe other than Superman.

This part I am taking with a grain of salt. I’ve worked on enough movie projects to know that things change drastically between the script and the cutting room floor. It’s nice to hear the whispers that she will be more then a small cameo, and it’s GREAT to hear that she will be fighting in the big final battle. Hopefully, they don’t have her end up being Lois Lane 2.0 and just a new pretty face for Superman to save over and over. 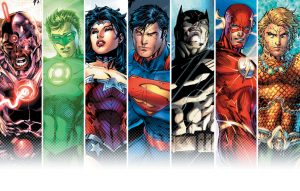 Leaving her origins vague may mean that they are planning on giving her a solo movie later to explain things, but I’m guessing it’s due more to pacing and trying to keep the movie shorter than Gone with the Wind. They are introducing A LOT of heroes in this movie. It initially focused on Superman and Batman, but now the confirmed cast includes Wonder Woman, Lex Luthor, Cyborg, Aquaman, and possibly even Nightwing. That’s a lot of explaining to do if they are even going to briefly touch on everyone’s origin stories, and introducing that many characters in a film will cut drastically into the screen time of any individual character. This makes me nervous, because I want Diana to get the screen time she deserves as part of DC’s trinity.

Dawn of Justice has to do well for Wonder Woman to get her own film. These rumors give me hope, but we have a long way to go before we see the final product. 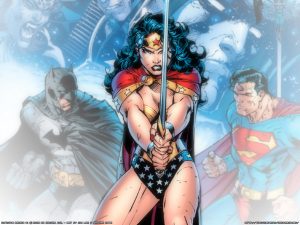