A few months ago, I was asked to help bring my hero to life. I thought I was dreaming when Sam Balcomb of Rainfall Films brought the initial idea to me. Was it possible that Wonder Woman might finally be represented well on screen? Would I really get to help make that dream into a reality?

Since that fateful day, I’ve been able to talk about Wonder Woman even more than usual. Breaking down everything from Diana’s history and motivations, to classic comic poses and ancient Greek myths. We decided to heavily base our short on the Perez-era Wonder Woman, complete with Them

yscira and monsters out of Greek mythology. We poured over my collection of Wonder Woman comics to capture all the details, even if they would go unnoticed by most of the audience. Through it all, the Rainfall team was adamant about being true to the character, and making a truly kick-ass female superhero.

Then there was the most daunting task of all: designing the outfit. Costuming is a huge part of my life, and I’ve tried my hand at Wonder Woman’s costume before, but we really wanted something unique that would pay homage to Diana’s Greek and warrior roots. It had to be functional, but still capture the iconic look that is so familiar to pop culture. We finally settled on two distinct looks, a more armored suit for the flashbacks to Paradise Island and a sleeker look for the city scenes. Our incredible costuming team, Heather Greene and Sarah Skinner, were able to create the entire costume from scratch, including the leather armor and steel scale maille. Yours truly braided the Lasso of Truth!

The days on set were incredible. Everyone was thrilled to be a part of the project. Rileah Vanderbilt, who plays Wonder Woman in the short, was incredibly dedicated and a huge Wonder Woman fan! The stunt team was incredibly talented and we all watched in amazement as Wonder Woman, with their help, flew for the first time. America Young, Clare Grant, Alicia 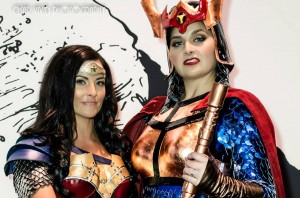 Marie, Christy Hauptman, and myself filled out the rest of the Amazons. It was so much fun getting to know these wonderful women while dressing up and playing with swords. It was even more fun to reconnect with all of them at Comic-Con 2013 a few weeks after shooting. Rileah and I even hit the convention floor cosplaying as Wonder Woman and Big Barda, also from DC Comics.

This was truly a labor of love. By combining our talents and passion for this character, I believe we were able to create something worthy of the Amazon Princess. I will be posting more info about this project in coming weeks, but in the meantime, I hope you enjoy our passion project!